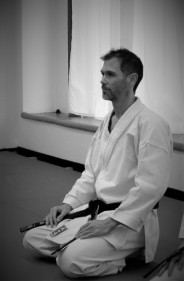 Kanshin Karate was created as a sister club to Neil’s own successful club in Sutton – Kenmei Karate – and follows the same philosophy toward karate training and teaching. Neil was the inspiration behind the creation of the club, helped greatly in setting it up and initially taught all the lessons.

Neil has relocated to Norway where he reopened Kenmei, but he continues to teach at Kanshin occasionally and acts its the principle instructor.

Avi was born in 1969 in Israel and moved to the UK in 1997. He works as an IT consultant and holds a B.Sc. in Mathematics and Computer Science. Avi started training in 2011 at the Rising Sun Karate academy in Woking under Sensei Jamie Sims. Whilst still a brown belt he qualified as an assistant instructor under Sensei Neil Jerome and together they set up Kanshin Karate in Guildford. Avi passed his shodan in 2014 and has since been running Kanshin Karate club teaching most of the lessons.

we are now training regularly: mondays 8:15-9:15pm, thursdays 8-9pm & saturdays 2-3pm. all adult students must be fully vaccinated to train (unless medically exempt).

How to find us